Our History and Building 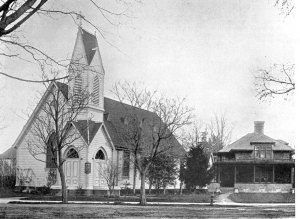 In 1868, a fledgling Episcopal mission was first organized in Santa Rosa. Occasional services had been held here as early as 1860 or 1861.

Our building was begun in 1872 and completed in 1873. It's said that the church was built from the wood of two redwood trees. It is the oldest church structure in continuous use in Santa Rosa. The Church was declared debt free in 1876 and consecrated in November 1877. The cost for church, furniture and equipment was $3,000.00!

In 1885, a larger church was needed, so the building was quartered and drawn apart to essentially its current size.

Incarnation was officially incorporated as a parish of the Episcopal Church in 1895.

In the earthquake of 1906, the sidewalls bulged out about eight inches off the foundation, but otherwise the church was undamaged. It and the nearby rectory served as a hospital and morgue for the devastated city of Santa Rosa.

From 1943 until 1953, ten Sisters of the Transfiguration, an Episcopal order of nuns, were devoted workers in the parish. They served as Sunday School teachers, ran an excellent nursery day school and even filled in as organists at times.

Much of the carving in the church, including the altar, choir stalls, reredos and litany desk, was the work of two women of the parish, Augusta C. Collett and Anna Finlaw.

The Stations of the Cross on the side walls of the church were carved by Elwin Millerick, a Santa Rosa carver. During the Desert Storm War in 1990, when the church was kept open for prayer, the soldier in the first station disappeared. Mr. Millerick carved a replacement within a week. Each station was donated by an individual or family as a memorial gift.

You can learn more about the church building, as well as the rest of our campus, by watching our online campus tour videos.

We are currently in a process to develop a vision for the future of our buildings and grounds. Read more about our Imagine Incarnation process.

Join us in person or online!

Our church parking lot is located around the corner at 636 Cherry Street. The lot often fills up for our Sunday morning services. Additional free church parking is available in the small gravel lot at the corner of Mendocino and Cherry, or in the city garage at 521 7th Street (free on Sundays), which is a two-minute walk from the church. Finally, street parking is also free on Sundays.

You can make a donation to Incarnation online, toward your pledge or as a special offering, by clicking below.