How Do Solar Panels Work?

How do solar panels work?

A solar panel is made up of a layer of silicon cells, a metal frame, wiring, and glass casing surrounded by a special film. Within each silicon cell is a thin wafer composed of two layers of silicon. One layer is positively charged, the other negatively charged, forming an electric field. When sunlight or “photons” strike the cell, the electrons are excited and ‘come loose’ from atoms within the wafer. The loose electrons are set into motion by the electric field surrounding the wafer, and this motion creates a direct current (DC) of electricity. Most American buildings use alternating current (or AC) electricity; the DC current is converted to AC electricity by an “inverter.” The now-AC electricity runs through an electrical panel and is distributed within the building to lights and appliances just like electricity from the power company.

Several factors affect the panel’s electricity production: shade, the season, the tilt of the panel, and the direction of the sunlight. On cloudy days or at night, the solar panels may not capture enough sunlight for the current demand. At midday, they may collect more than is needed at that time. A net meter measures the electricity flowing both to and from the building. The utility company may provide credit for surplus power sent back to the grid. Remaining on the PG&E power grid allows us to automatically access extra electricity if we need more than our panels are producing (such as during a cloudy day) or to send any leftover energy produced by our panels on to the power company to use.

Solar panels lower utility bills, paying for themselves over time. They help reduce air pollution caused by utility companies by reducing the workload. During periods of peak demand, solar systems help increase “peak load generating capacity,” saving the utility from having to turn on expensive and polluting supplemental systems. Contributing clean, green power from our own solar electric system reduces our impact on the environment and saves money at the same time. 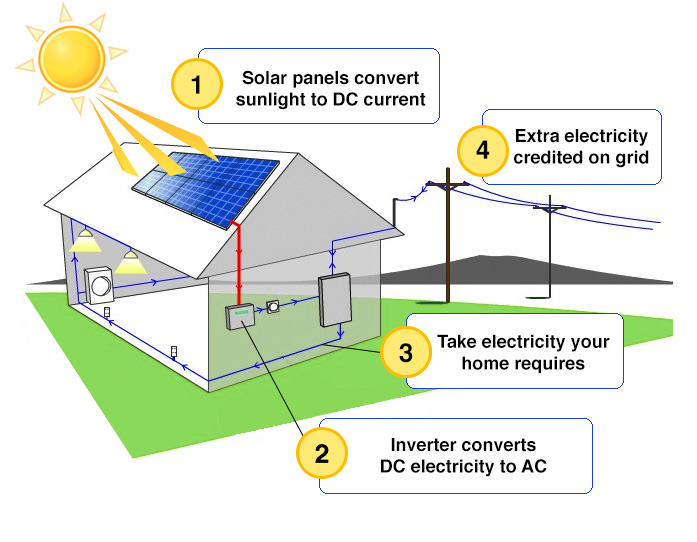 To make a donation to the roof & solar project, click here.

Share this page: How Do Solar Panels Work?
Incarnation Goes Green Donate or Pledge to the Solar Campaign Roof and Solar FAQ How do solar panels work?
View Entire Post

Join us in person or online!

Our church parking lot is located around the corner at 636 Cherry Street. The lot often fills up for our 9:00 and 11:15 a.m. services. Additional free church parking is available in the small gravel lot at the corner of Mendocino and Cherry, or in the city garage at 521 7th Street (free on Sundays), which is a two-minute walk from the church. Finally, street parking is also free on Sundays.

You can make a donation to Incarnation online, toward your pledge or as a special offering, by clicking below.